Hatton members were able to witness Bob Parfitt receiving a Paul Harris Fellowship with one Sapphire (if effect a double PHF) when President Nigel re-presented the lapel medallion to Bob at the club meeting on 21st January. The honour was originally presented by District Governor Rodney, on behalf of all the clubs in the District 1070 at a meeting of the District Council, in recognition of Bob’s contribution to district activities as well as his charity work with Refugee Relief over many years.

Congratulation Bob on a well-deserved award 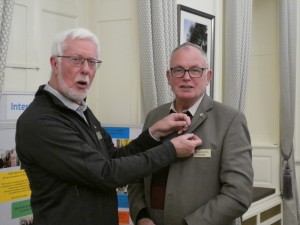